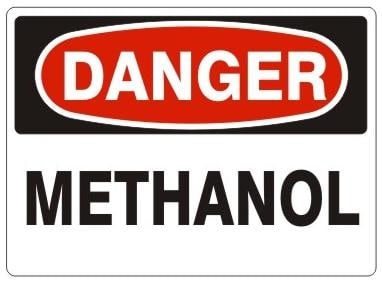 What exactly is Methanol?

Methanol, also known as methyl or wood alcohol, is a colorless organic liquid at normal temperature and pressure. However, this description is just a small piece of what a user must know and understand in order to transport, store, and use methanol safely.

Methanol is a useful material that can be used as a fuel, fuel additive, a solvent, a refrigerant, or a component of antifreeze. Emerging applications of methanol include its use as a source of protons for direct methanol fuel cell technology and as a turbine fuel for electric power generation.

Hazards associated with the Exposure to Methanol

Non-dietary potential exposure to methanol (primarily through inhalation) can result from using certain consumer products, such as paints, windshield washer fluids, antifreeze, de- icers, and adhesives that contain methanol as a solvent.

Occupational (workplace) exposure is likely to cause the highest daily exposure to methanol. Occupational exposures typically occur through inhalation of methanol vapors during production or use. About 70% of the methanol produced in the United States is used as feedstock for the production of other organic chemicals and a variety of consumer products, including windshield washer fluid. It is also used in the treatment of wastewater and sewage.

Less common scenarios that are part of general population exposures include the use of methanol-containing fuels as solvents and accidental spillage. Each year, several thousand cases of accidental ingestion of gasoline are reported to United States poison control centers. However, if M85 (85% methanol and 15% gasoline) were substituted for gasoline in these situations, methanol would considerably increase the potential for serious morbidity or mortality. Skin contact with methanol solutions can also lead to rapid absorption and appearance of signs of toxicity.

Methanol’s primary routes of entry into the body are by inhalation, absorption through the skin as a result of contact, eye contact, and ingestion by either eating or drinking.

Methanol is easily and rapidly absorbed by all routes of exposure and distributes rapidly throughout the body. Humans absorb 60%-85% of methanol that is inhaled. The rate of metabolism for methanol in the body is 25 mg/kg-hr, which is seven times slower than for ethanol and is independent of concentrations in the blood. Humans metabolize methanol into formaldehyde as the first step. The formaldehyde is then converted to formate (which can be toxic at high concentrations) and finally, to carbon dioxide and water.

Methanol is a poison. This means that it can cause severe and sometimes fatal acute toxic effects from a single exposure. Therefore, the principal concern is with acute exposure through any primary route of entry. The signs and symptoms of methanol exposure do not occur immediately. The time lag between exposure and onset of symptoms may cause misdiagnosis of the cause, particularly in persons who are unaware they have been exposed, or who are unaware of the toxic nature of methanol and the differences between methanol, ethanol, and isopropyl alcohol.

Signs and symptoms of methanol poisoning include headache, dizziness, vomiting, severe abdominal pain, back pain, difficulty breathing, cold extremities, lethargy, and lack of coordination. Eye exposure can also cause a burning sensation accompanied by tearing, redness, and swelling. Direct contact with the liquid may cause conjunctivitis and corneal burns. High exposures may result in blindness and death.

Generally, the affected individual experiences a short period of intoxication with a mild depression of the central nervous system, followed by a period in which no symptoms of intoxication or toxicity are noted (commonly 12 to 14 hours). This is followed by physical symptoms of poisoning, such as headache, nausea, vomiting, loss of equilibrium, severe abdominal pain, and difficulty in breathing. These symptoms can be followed by coma and death. Other hallmarks of acute methanol toxicity are disturbances of the visual system and accumulation of acid in the body. Methanol exposure results in vision effects that range from excessive sensitivity to light, to misty or blurred vision, to dramatically reduced visual acuity and total blindness.

In contrast to the effects of acute, high-concentration exposure, relatively little is known about the effects of chronic, low-dose methanol exposure. Based on the limited number of case reports and epidemiologic studies, the effects of prolonged exposures to methanol are similar to those of acute exposure: visual and central nervous system disorders. Repeated direct skin contact with methanol can cause dermatitis with dryness and cracking.

Exposure to methanol can occur via inhalation, skin absorption, contact with the eyes, or ingestion, whenever methanol is used or handled. The level of risk of exposure to methanol will dictate the appropriate level of personal protective equipment required. At a minimum, safety glasses with side shields or safety goggles and task-appropriate gloves are recommended. Depending on the situation, additional personal protective equipment may be required.

Prompt action is essential. If necessary, medical assistance must be obtained as soon as possible. A Safety Data Sheet (SDS) for methanol or materials containing methanol should be carefully reviewed for information on first aid measures.

In case of inhalation of methanol vapors, first remove the individual to fresh air if it is safe for you to do so, and keep him or her warm and at rest. Monitor for respiratory distress. If difficulty in breathing develops or if breathing has stopped, administer artificial respiration or cardiopulmonary resuscitation (CPR) immediately and seek medical attention. If trained to do so, administer supplemental oxygen with assisted ventilation, as required.

In case of contact with skin, immediately use an emergency eyewash or safety shower, and flush the exposed area with copious amounts of tepid water for at least 15 minutes. Contaminated clothing and shoes should be removed under the shower. Wash the area thoroughly with soap and water. Seek medical attention if irritation or pain persists or if symptoms of toxicity develop. Wash contaminated clothing and shoes before reuse.

In case of contact with eyes, immediately irrigate the eyes with copious amounts of tepid water for at least 15 minutes. The eyelid should be held apart during the flushing to ensure all accessible tissue of the eyes and the lids are in contact with water. Obtain medical attention.

Ingestion of methanol may be life threatening. Onset of symptoms may be delayed for 18 to 24 hours after ingestion. Do not induce vomiting. Get medical attention immediately. The individual should remain under close medical care and observation for several days.

Waste methanol in concentrations equal to or greater than 24% by weight meets the EPA’s definition of an ignitable hazardous waste. Product-grade methanol, when disposed, is a listed hazardous waste. Waste methanol, or water contaminated with methanol, is considered a hazardous waste and must never be discharged directly into sewers or surface waters. It may only be disposed of at a licensed facility permitted to handle Hazardous Waste as defined in the United States Resource Conservation and Recovery Act (RCRA). Waste methanol is also responsive to reclaiming by filtration and distillation.

It is the responsibility of the user to strive to be better informed, and more capable at identifying and controlling hazards related to methanol. On most occasions, users are unaware of the severity of the hazards. Mishandling is typically the result of a lack of knowledge, not willful destructive intent. Finally, consider using at least three, and in high hazard situations, as many as eight independent protective control measures. Learn to anticipate, prevent, recognize, and respond to abnormal operating conditions.