Beryllium – What’s the Buzz About? 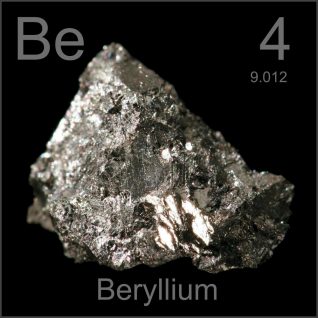 Beryllium is a naturally occurring element found in several minerals. It’s physical properties make it an essential material for the aerospace, telecommunications, technology, medical and defense industries. It is lighter than aluminium and stronger than steel. It also has a high melting point, superior thermal stability and conductivity, reflectivity, and transparency to X-Rays. Because of these unique properties, Beryllium is considered a strategic and critical material by the U.S. Department of Defense. It’s no wonder that the U.S. is the largest producer of beryllium accounting for roughly 87% of the world output.

Despite its positive impact on industry beryllium also has negative effects on the people who are exposed to the metal during the mining process. During the production process, workers may be exposed to airborne beryllium particles or on work surfaces. Exposure to these particles can wreak havoc on the human body over time causing sensitization. This sensitization puts individuals at risk of developing a horrific disease of the lungs called Chronic Beryllium Disease (CBD). Exposed workers can also develop health effects such as Acute Beryllium Disease (ABD) and lung cancer.

What exactly is Chronic Beryllium Disease?

The immune response that develops as a result of exposure to beryllium dust and/or fumes is known as sensitization. A beryllium lymphocyte proliferation test (BeLPT) can be performed to detect the sensitization in the blood stream. Sensitized workers can develop CBD, a respiratory disease that slowly progresses and is characterized by the formation of lung lesions called granulomas. These granulomas impair the lungs ability to fully expand and oxygenate the blood. Rates of progression can vary widely and although symptoms of CBD can be treated, there is no cure for the disease.

What is OSHA doing to protect workers from Beryllium exposure?

Initial research conducted by NIOSH beginning in 1998 began to establish a better understanding of processes and exposures that may present a potential risk for workers. Fast forward twenty years and extensive measures are now in place to protect workers exposed to beryllium. OSHA began enforcement of these new rules beginning in May 2018, however some compliance requirements have been extended to December 2018. The extension does not affect the new rules on PELs for general industry, construction and shipyards or the general industry provisions for exposure assessment, respiratory protection, medical surveillance and medical removal established in May 2018.

Where do we go from here?

It remains to be seen how these new rules will impact the occupational industry and its workers. Currently, OSHA estimates that 62,000 workers are exposed to beryllium in roughly 7,300 establishments in the U.S. alone. Beryllium exposure is always going to be a concern, however with new rules in place we can be hopeful that exposure doesn’t have to equate to chronic health problems.