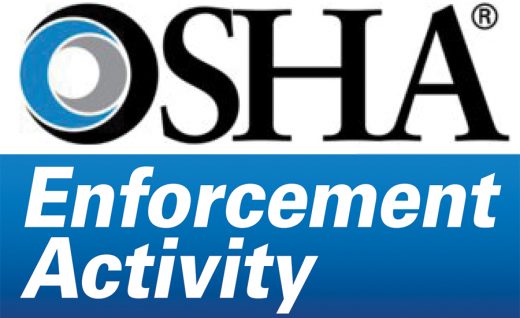 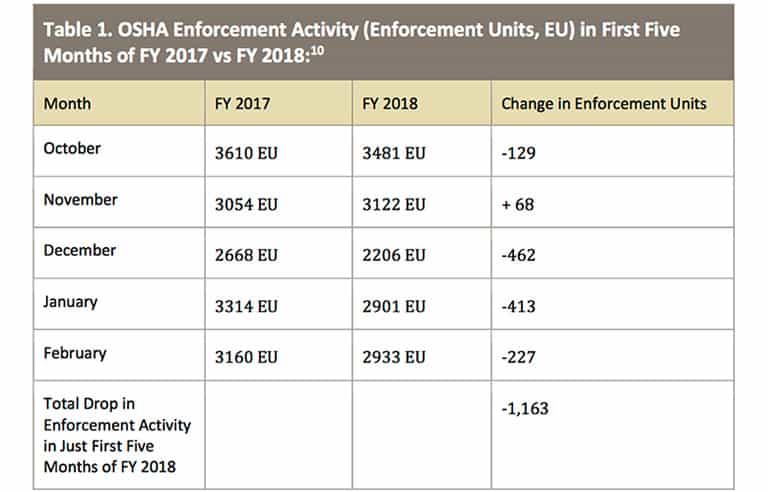 In a data brief issued June 11, NELP states that enforcement units in OSHA’s Enforcement Weighting System, which places values on certain types of inspections to measure enforcement activity, are lagging behind their fiscal year 2017 pace in the first five months of FY 2018.

NELP states that OSHA is 1,163 enforcement units behind so far this fiscal year, which runs from Oct. 1 to Sept. 30. In the first five months of that span, only November had more enforcement units, up 68 from the previous period, while December and January data show that the agency trailed its FY 2017 pace by more than 400 units each month.

The Enforcement Weighting System, slated to go into full effect Oct. 1, was outlined in a memo from former Assistant Secretary of Labor David Michaels on Sept. 30, 2015.

“In the past, we have used the number of inspections as the primary metric to measure enforcement activity,” Michaels said in the memo. “While this metric served a useful purpose, it penalized those field managers that took on more complex inspections that required a greater amount of [inspector] effort.”

“This has clearly led to serious cutbacks in enforcement activity that raises vital questions about OSHA’s ability to protect workers,” Deborah Berkowitz, director of NELP’s Worker Health and Safety Program, writes in the data brief.

Acosta has proposed hiring as many as 42 new full-time equivalent employees as compliance safety and health officers. In his opening statement during a Senate appropriations subcommittee hearing in April, he highlighted OSHA’s nearly 32,000 inspections in the 2017 calendar year.

“That’s a particularly important figure because 2017 marked the first time in five years that inspections increased year over year,” Acosta said during the hearing, adding that the increase came in spite of suspension of enforcement in certain regions affected by hurricanes.

In its congressional budget justification, OSHA set a goal of 30,840 inspections for FY 2018 – 1,556 fewer than in FY 2017 – and will focus on “the highest-impact and most complex inspections at the highest-risk workplaces.”